Know what your consumers really want, thanks to cognitive commerce 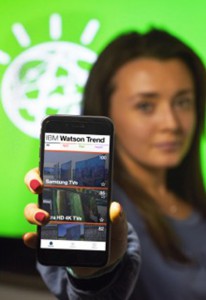 The world is awash in data, most of it unstructured, and the volume is growing rampantly. Consider that by 2020, it’s expected there will be 44 zettabytes of data in the world—the equivalent of 170 newspapers being delivered daily to every man, woman and child on the planet. What’s more, 80% of most of the world’s data is “dark data”—data including videos, images, audio files and conversational text that is nearly impossible to understand, reason and learn from. With this rising tide of data, coming from an increasingly wide number of sources, the challenge lies in how to analyze it, gain insights from it and apply those insights to drive desired outcomes.

Nowhere is this truer than in the world of retail. In order to make use of the vast majority of the data assets that are available out there, we need a new paradigm; we need cognitive commerce.

Interconnected systems across sales channels—in-store, online, mobile and call centres—capture and retain vast amounts of structured and unstructured data. Each customer’s journey is a well-documented trip that leaves a long trail of data: purchase information; lifetime value; where the buyer spends time on a site; how much is being spent in a channel; where and when customers prefer to buy; and what may have caused them to defect. Add external sources into the mix—think social, economic or environmental data—and what emerges is a vivid portrait of customers and market opportunities.

One way retailers can harness all this data is to invest in cognitive commerce—sophisticated systems that are capable of aggregating a seemingly infinite volume of information and infusing it with a level of intelligence or cognition never before available. This means deeper human engagement is now possible because cognitive systems can create a more nuanced picture of each individual and be more anticipatory. In short, it allows retailers to better understand their shoppers—learn about their specific behaviours, personalities and emotions, as well as identify which brand messages are most impactful.

By distilling the sentiment of tens of millions of online conversations from thousands of sources like social media sites, blogs, forums, comments, ratings and reviews; the IBM Watson Trend app reveals how consumers are feeling about a particular product they own or are considering to purchase. It provides both consumers and retailers alike with a daily view of the top 100 trends, while also predicting the hottest new products before they sell out. The app even detects which products will become fleeting fads and which ones will have longevity.

This past holiday season the app identified several popular products and the stories behind them. For example Watson discovered that consumers are flocking to brands that offer “barefoot running” or “natural running” shoes marketed to help prevent injury. It found that Nike shoe owners in particular are talking about Nike’s Free, the Air Max and Flyknit Racing Shoes, which offer colour and design versatility as both athletic and casual footwear.

The app also reported that parents were looking for more “edutaiment” focused gifts for their kids, which is why MeccaNoid—a personal robot that teaches children from ages 8 to 12 how to create, learn and code was so popular. And with Star Wars mania at fever pitch this past holiday season, Watson also identified the buzz around a pricey BB-8 that responds to human voice commands and shows and records holographic videos.

Retail companies also benefit from applications like the IBM Watson Trend app to determine what makes people tick, to differentiate themselves from the competitors and to build longer lasting relationships with all their key stakeholders.

Imagine that you own an electronics company and a photography student is navigating through your website to purchase a digital camera. If you know exactly what information is most important to them—say that it is waterproof and can be submerged in water up to 100 feet, or that it can also tolerate dust, shock and extreme cold temperatures—then you’d know that it’s highly likely they will buy a KeyMision 360 Nikon camera and have that camera well stocked. Thanks to the IBM Watson Trend app you’d also know that conversations around Nikon cameras tend toward people who are just getting into higher-quality photography and that the trend is widespread across the United States. Like interacting with a sales associate, this student’s retail experience could be influenced by the best choice presented—one he or she might have not discovered on their own.

There is no doubt we are living in a consumer-centric world greatly influenced by emotion. To establish a competitive advantage, today’s retailers need to know exactly what their customers want, when they want it and what price they want to pay for it. Cognitive commerce can give retailers all this information—allowing them the ability to provide shoppers with instant gratification; build consumer loyalty and drive better business results for their enterprise.

This article originally appeared in the April 2016 issue of Direct Marketing.

When it comes to data, quality matters more than quantity

Shaunna Conway is IBM Canada’s Business Unit Executive for Commerce. With over 10 years of demonstrated success in consulting and services experience, Shaunna is responsible for IBM’s go-market strategy in marketing, channels and customer segments. By building strong strategy and general management capabilities, Shaunna is recognized as a leader in large and complex outsourcing pursuits, operations, business development and consultative support.