DM Wrap-up: News from the week of February 2

Marketo and The Economist Intelligence Unit release report highlighting the impact of technology, the importance of managing customer engagement and the role marketers play in setting company strategy.

A study of 478 senior marketers and CMOs from around the world conducted by The Economist Intelligence Unit on behalf of Marketo Inc. reveals marketers’ top challenges, investments and forecasts for today and over the next five years. Among the key findings, more than 80% of all marketers say that their organizations will need to undergo dramatic changes in order to keep up with increased technical and consumer demands.

“The transformation taking place in marketing is profound as marketers race to adopt technology and add skills that will allow them to manage the entire relationship with the customer,” said Sanjay Dholakia, Chief Marketing Officer at Marketo. “Three out of every four marketers say that in three to five years, they will own the end-to-end customer engagement. That ownership puts marketing right at the center of revenue generation and setting the company strategy. For marketers to successfully make the leap forward – and drive a customer engagement strategy — they must embrace the use of digital marketing software.”

Marketers believe that change will occur in six areas:

For more findings and to download the full report, please visit www.marketo.com/next-era.

Stephen Thomas Ltd (ST), Canada’s premier integrated full-service agency specializing in marketing and fundraising exclusively for the non-profit sector, has been appointed by the University of Toronto (U of T) to develop integrated direct response strategy and creative execution for the annual giving campaigns for all of the university’s divisions and faculties under the brand umbrella of Boundless: The Campaign for the University of Toronto.

The result of a competitive agency review, ST, which has worked on various giving campaigns for U of T over the past four years, was awarded an 18-month assignment to develop a multi-faceted and integrated giving program to boost alumni donations to the university.

“ST understands the complexities of our ever-evolving annual giving program,” says Heather C. Ullman, Executive Director, Leadership and Annual Giving, University of Toronto. “Their fundraising expertise, creativity, and focus on client service and flawless execution made us feel confident there was no better partner to help us bring our brand to life through multiple channels, and to continue building on the success of our annual giving program.”

The first initiative to stem from the agency assignment will be an integrated Spring campaign that will include print, telemarketing and email – with subsequent campaigns to follow in the fall through to June 2016.

“We’re honoured the University of Toronto has chosen to partner with ST again. The annual giving program is complex and multifaceted,” says ST Vice-President and Chief Creative Officer Bryan Tenenhouse.  “Each campaign, starting with the Spring initiative, will include 26 unique packages, each with their own faculty logo, photography, signatory, custom letter copy and insert.”

Senior Account Director on the U of T account at ST, Julie Gales, adds, “The opportunity is to build on the established relationship each alumnae has with their specific division or faculty at U of T, while bringing the university’s ‘Boundless’ brand to life through direct channels.”

The Spring campaign is expected to launch in April. Strategic work on the Fall program has already begun.

uSell.com’s new DRTV campaign, created by Chicago-based Northern Lights Direct, is letting consumers know exactly how to get the most money for their old IPhone, Android, smartphone or iPad.

Nik Raman, Chief Executive Officer for uSell.com, says the campaign is designed to ‘change the game’ by clearly pointing out that not all trade-ins are created equal. “Many people are accepting less money for their old phones and other electronics than what they’re really worth, especially through store trade-ins.

“With this campaign, we are letting everyone know they can get most money – up to $350 – with the least effort, by selling their device through uSell.com,” says Raman.

He expects the new DRTV campaign to do great things for his company. “Our previous campaign, also created by Northern Lights, was a huge hit. We expect this campaign, which further solidifies our positioning, to be even more successful.”

Robert Ian French, President of Northern Lights Direct, has a similar take on the new campaign: “This commercial leaves no doubt in the viewer’s mind that uSell.com is the place to go to get the most money for your used iPhone, Android smartphone or iPad. We have absolutely no doubt consumers will pick up on this message and make this campaign as successful as the previous one.”

A global study sponsored by Teradata Corp., the big data analytics and marketing applications company, revealed this week an apparent disconnect between how chief executive officers (CEOs) see the current status and benefits of data initiatives and how lower-level managers see them. This and other disparities impede success and imperil the competitive advantage companies hope to realize.

“The survey is clear that organizations succeed when the data-driven vision and leadership are shared, and the benefits of data initiatives are consistently tracked, promoted, and most importantly, linked to corporate goals and business results,” said Chris Twogood, vice president of Products and Services Marketing, Teradata.

The survey conducted by The Economist Intelligence Unit showed that data-driven companies are more likely to outperform their competitors when it comes to profitability. However, only one in four companies gives financial rewards to those employees who readily adopt the use of data.

Converting data into insights is still a struggle – Many companies have invested significantly in gathering vast amounts of data, yet they still struggle to extract insights, put them to work for the business, and create truly data-driven organizations. When it comes to capturing and disseminating important business data, 57 percent of respondents believe their company does a poor job. The issue is significantly more pronounced among underperforming, less innovative, and less technology-reliant companies. There is little disagreement that access to necessary data and ability to convert it into actionable insights are the greatest obstacles to data adoption and utilization.

Data are unequally available even within data-driven and top-performing companies – Data are not equally available even within the most data-driven and top-performing companies. Two-thirds of respondents agree that some departments have much better access to data than others. This situation is particularly acute among companies with $500 million in annual revenue or more. While CEOs are less aware of the problem (only half agree it is the case), lower-level managers are very vocal about it. Eight in 10 senior vice presidents, vice presidents and directors agree that data are unequally available. At the same time, 42 percent of respondents find access to data cumbersome and not user-friendly, which further exacerbates the data-availability problem.

“Opportunities for analytics are expanding every day,” said Teradata Chief Analytics Officer Bill Franks. “Transforming from gut-led to data-driven requires cultural changes and because companies are struggling in this area, they are missing opportunities.”

Some clues as to why top-performing companies are more successful emerge from the survey: Among top performers —respondents who say their companies “significantly” or “somewhat” outperform in profitability — 63 percent say data initiatives are launched and driven by their corporate leadership and 41 percent have a centralized data and analytics group responsible for introducing and implementing data initiatives. Of those who say their companies underperform in profitability, those numbers are 38 percent and 28 percent respectively.

There is also a high correlation between a company’s tendency to rely on data when making decisions and its profitability and ability to innovate. Data-driven companies are more likely to generate higher profits than their competitors reporting a low reliance on data. They are also twice as likely to report they have a culture of creativity and innovation. Access to data and quantitative tools that convert numbers to insights are two to three times more common in data-centric companies. And, they are much more likely to reap the benefits of data initiatives – from increased information sharing to greater collaboration to better quality and speed of execution.

Who took the survey?

Choosing the right data to get the best customer insights 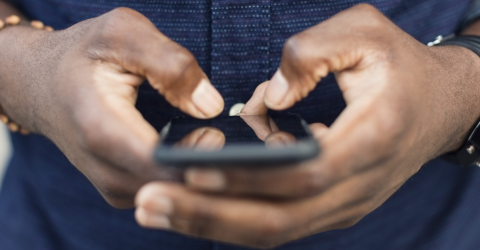